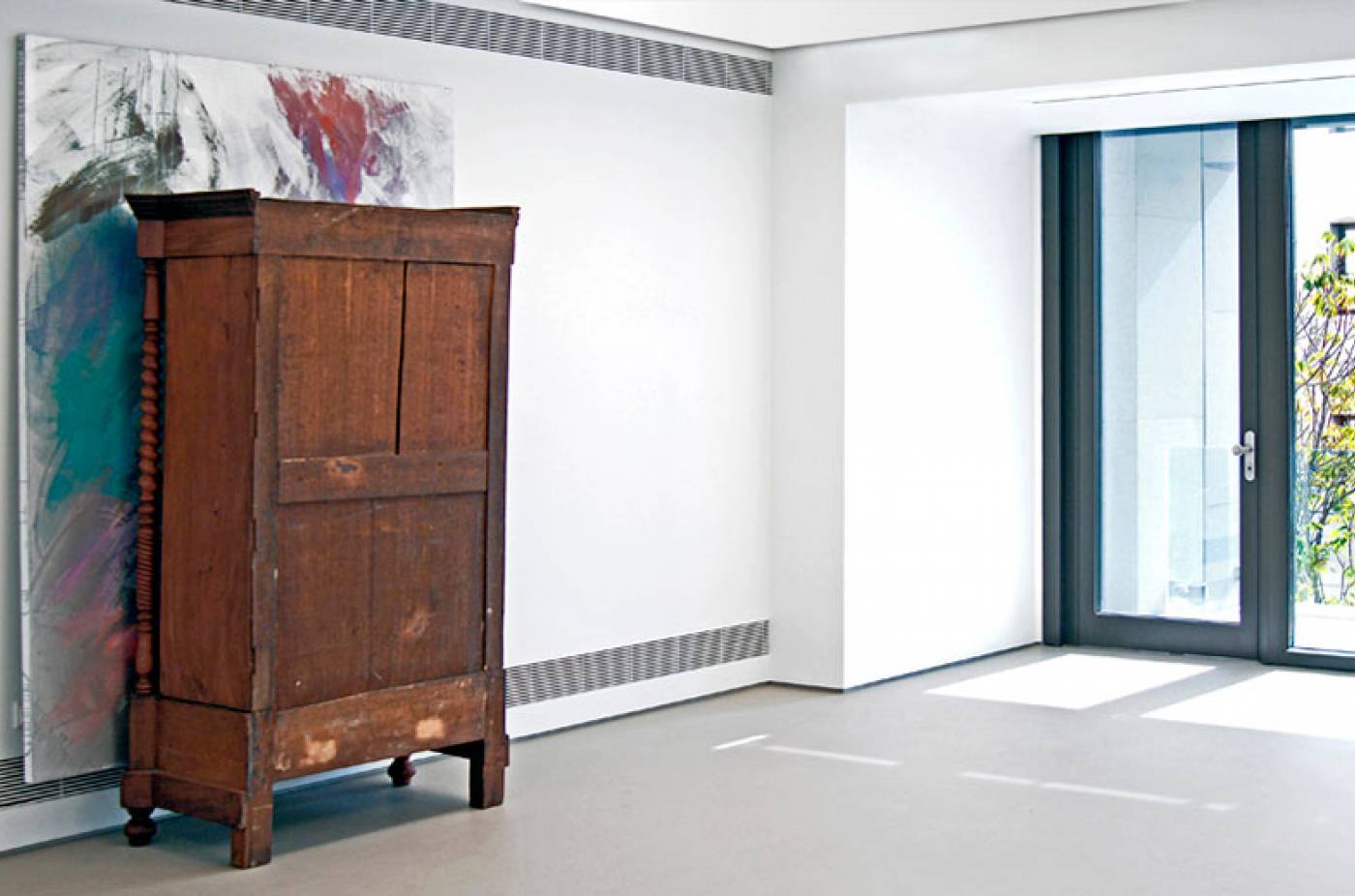 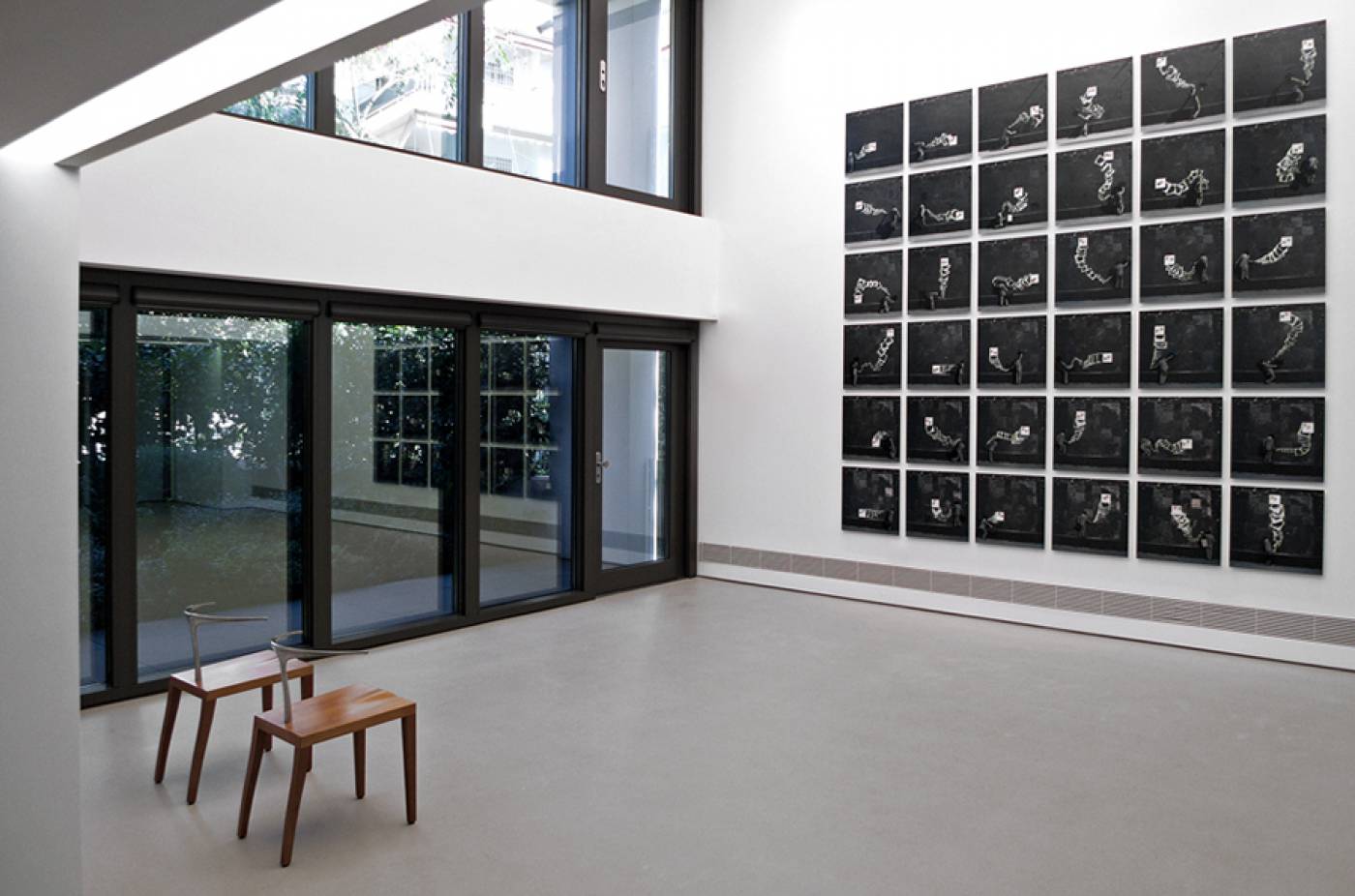 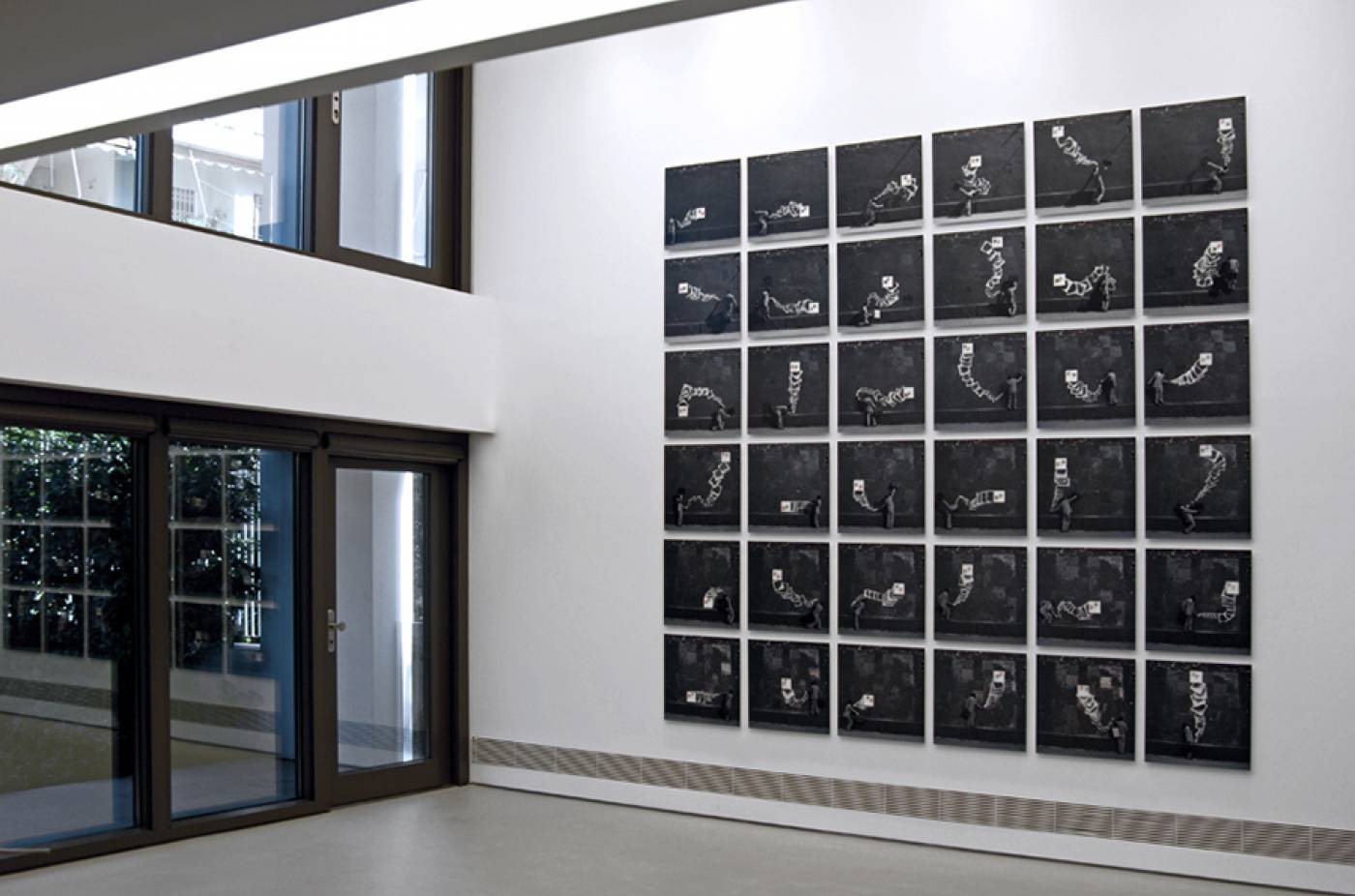 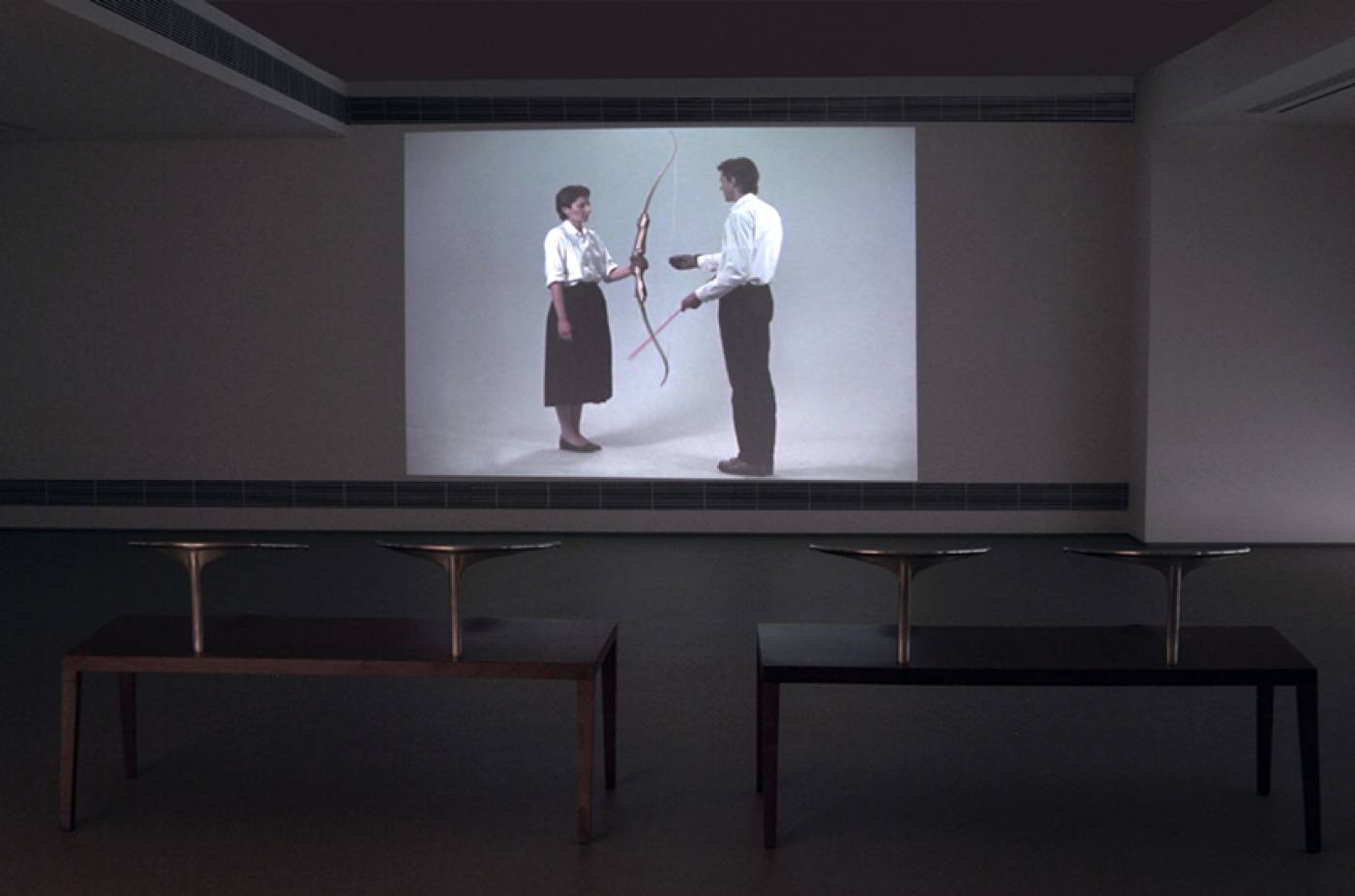 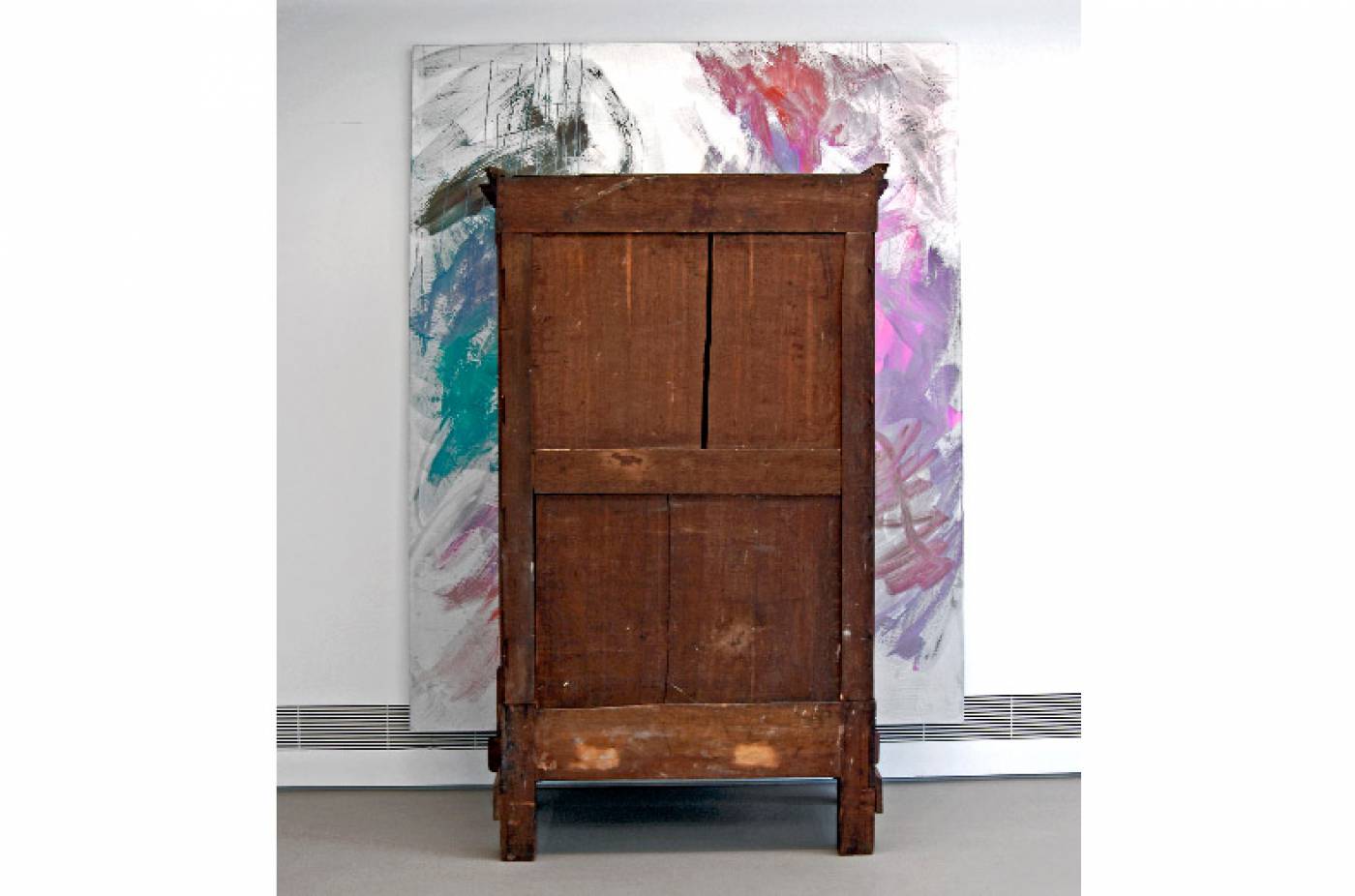 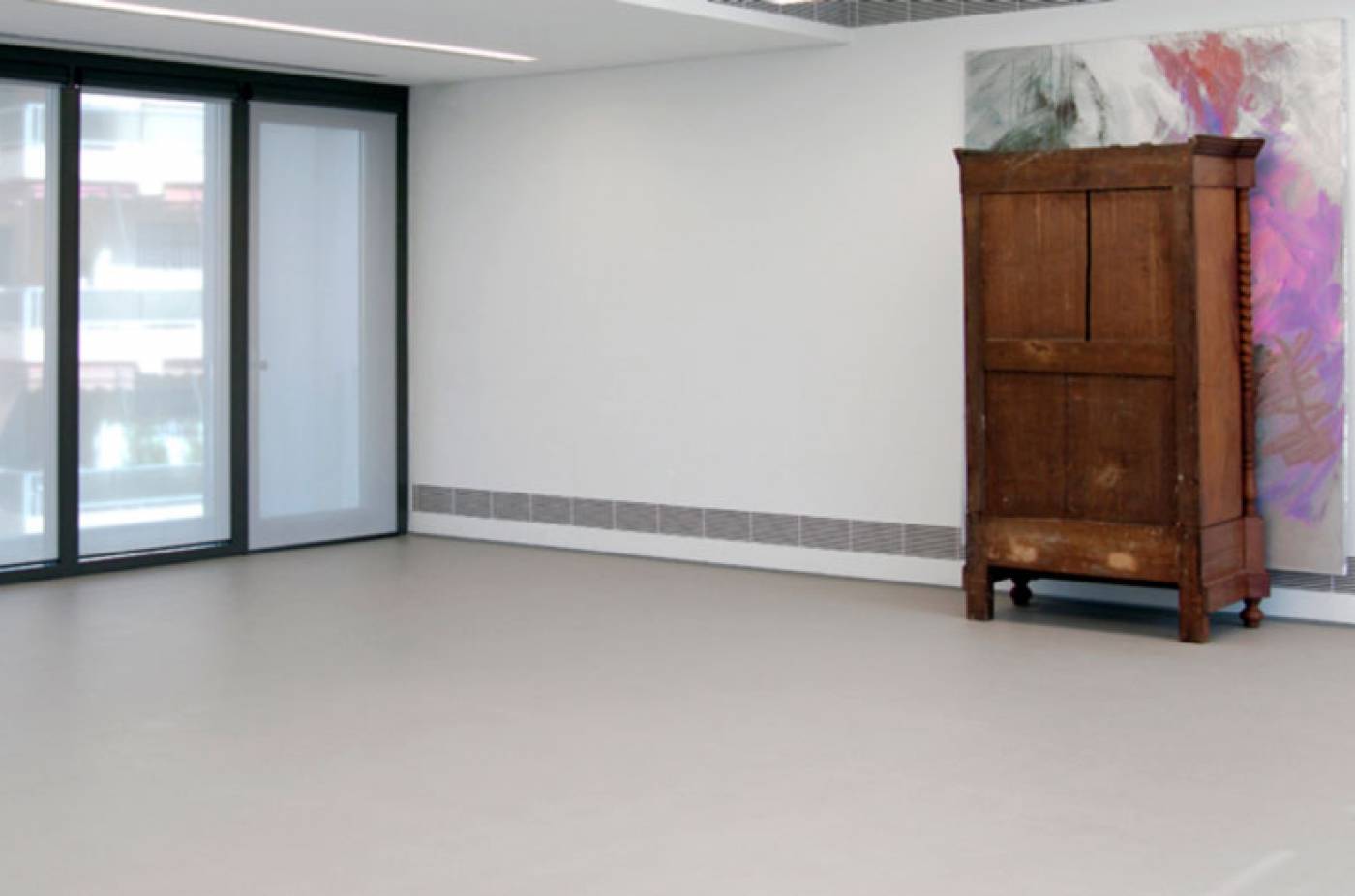 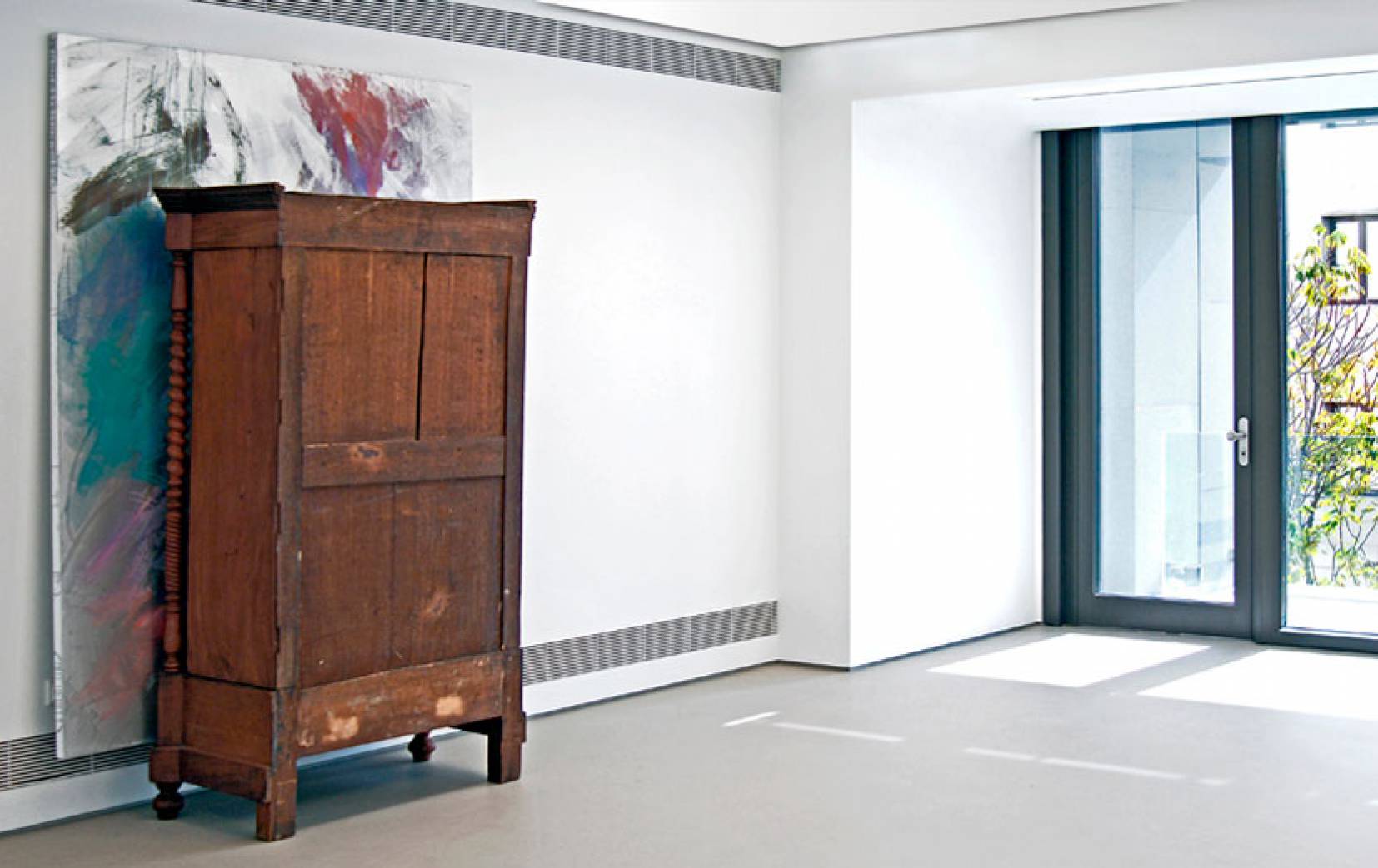 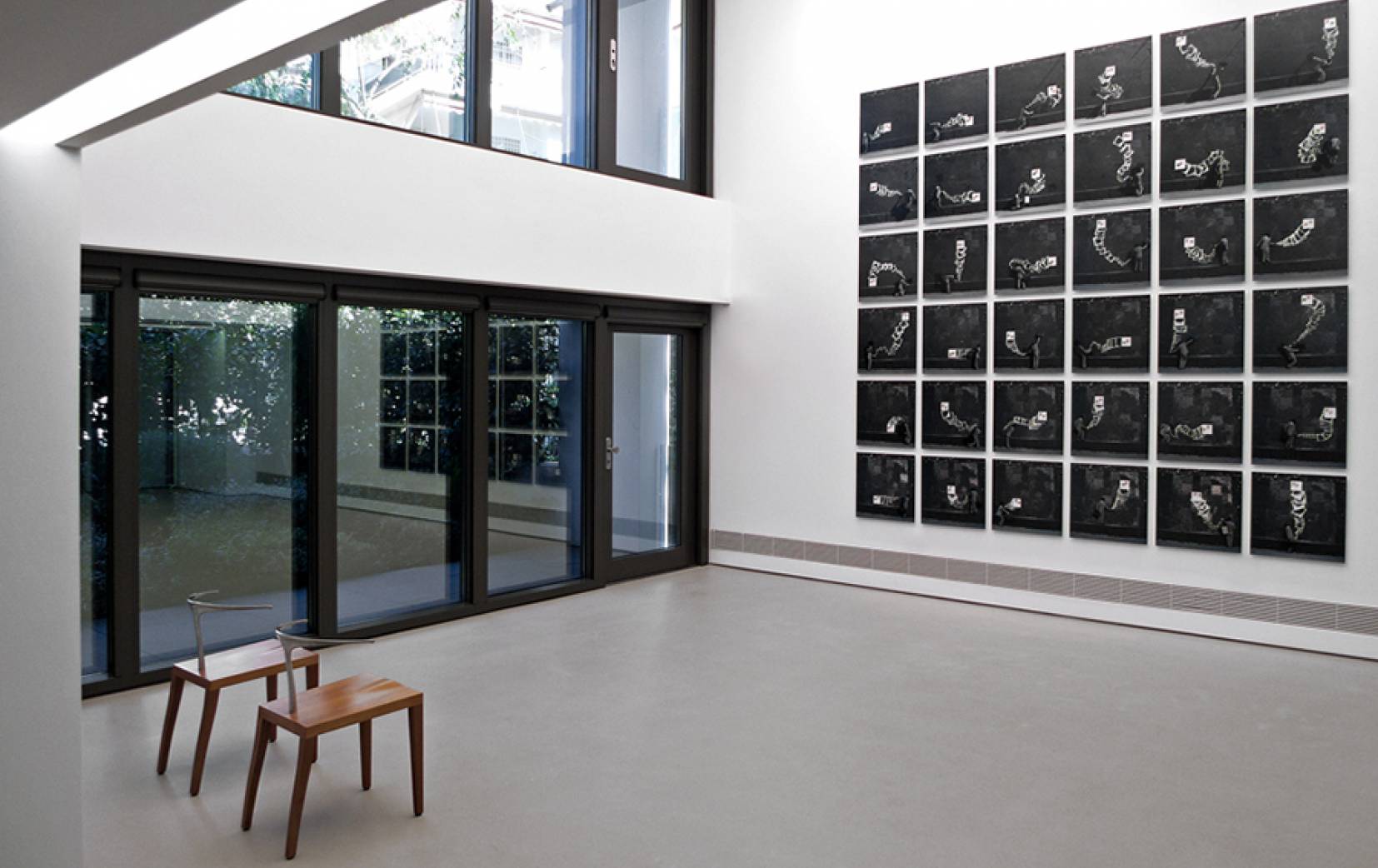 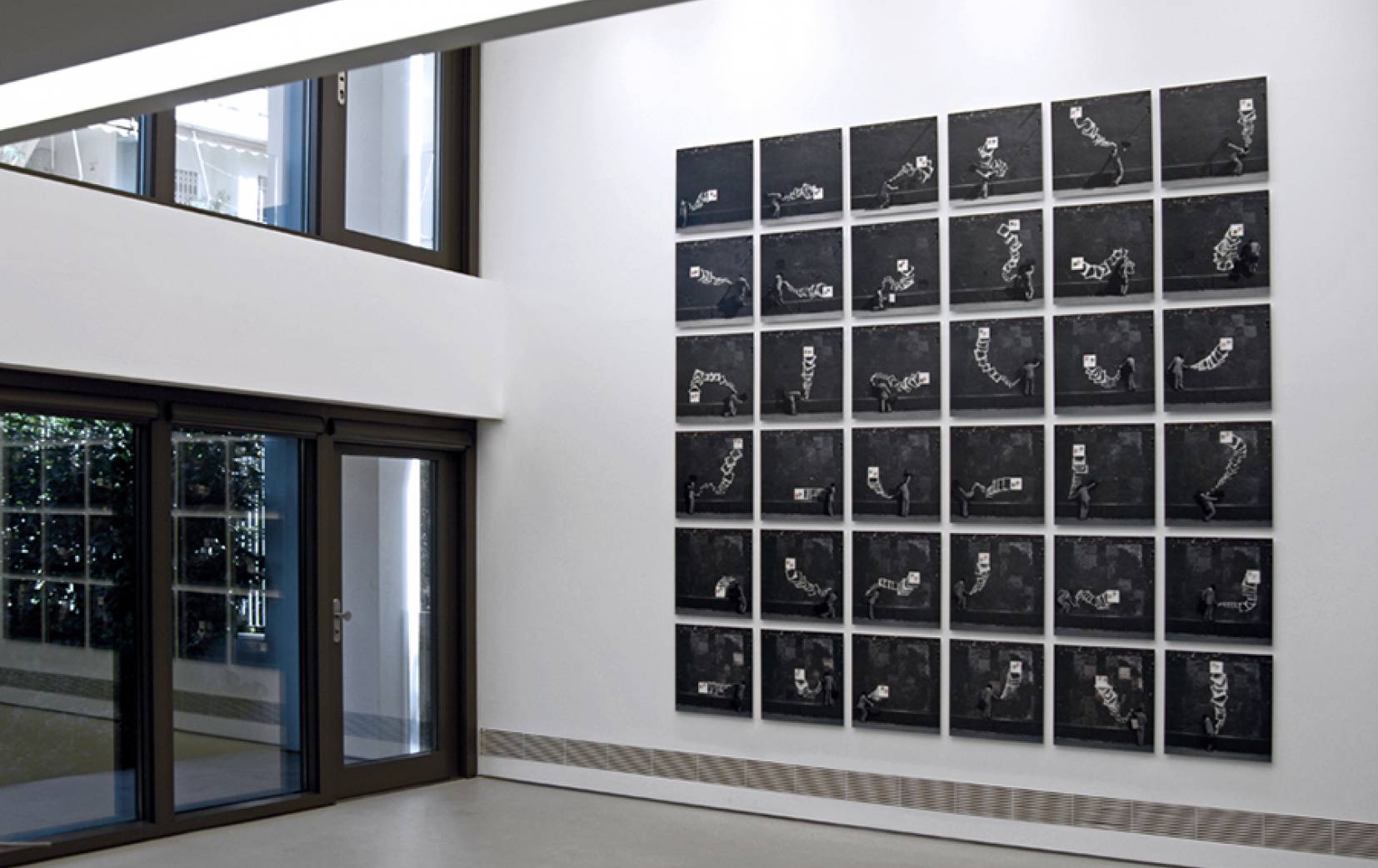 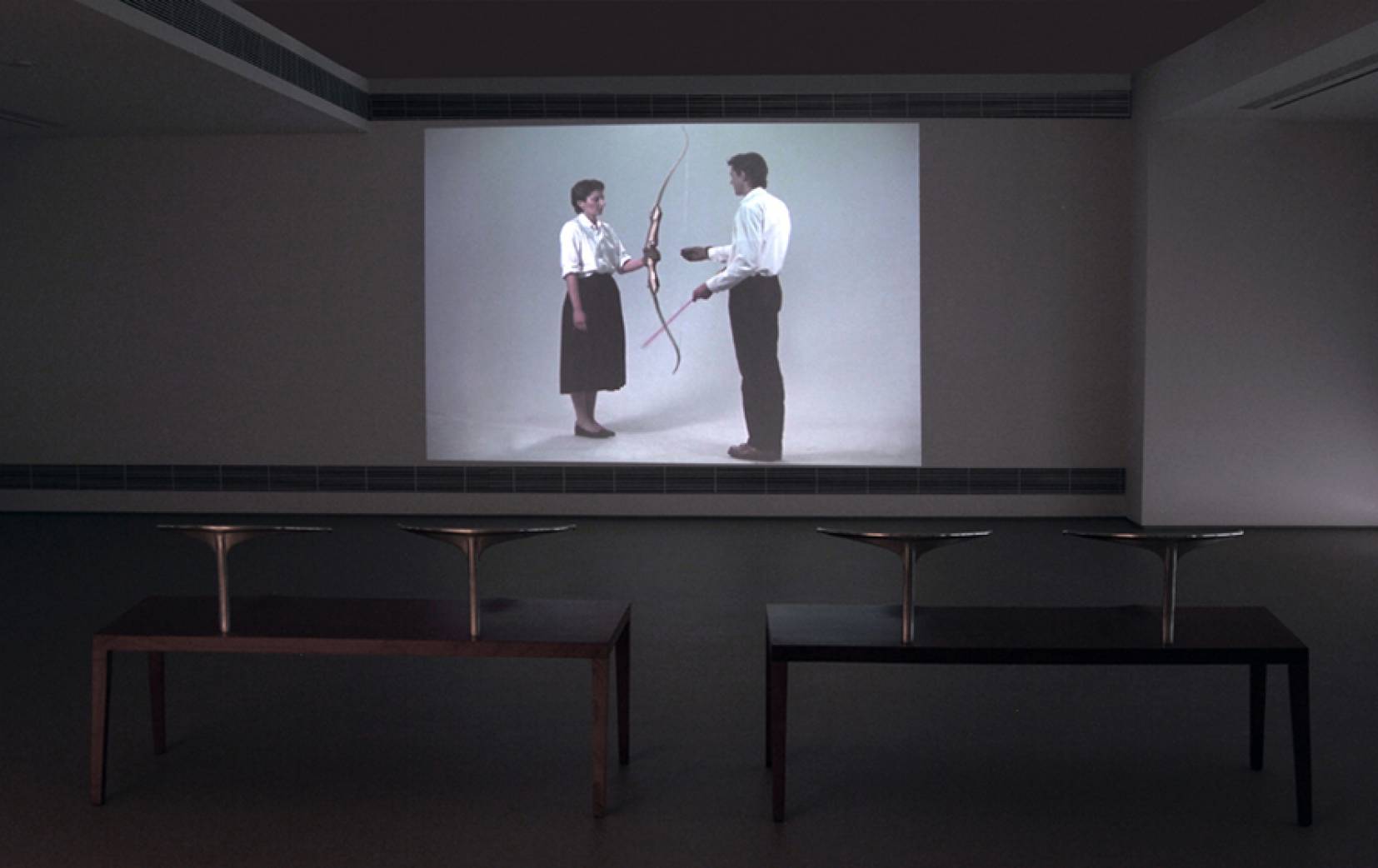 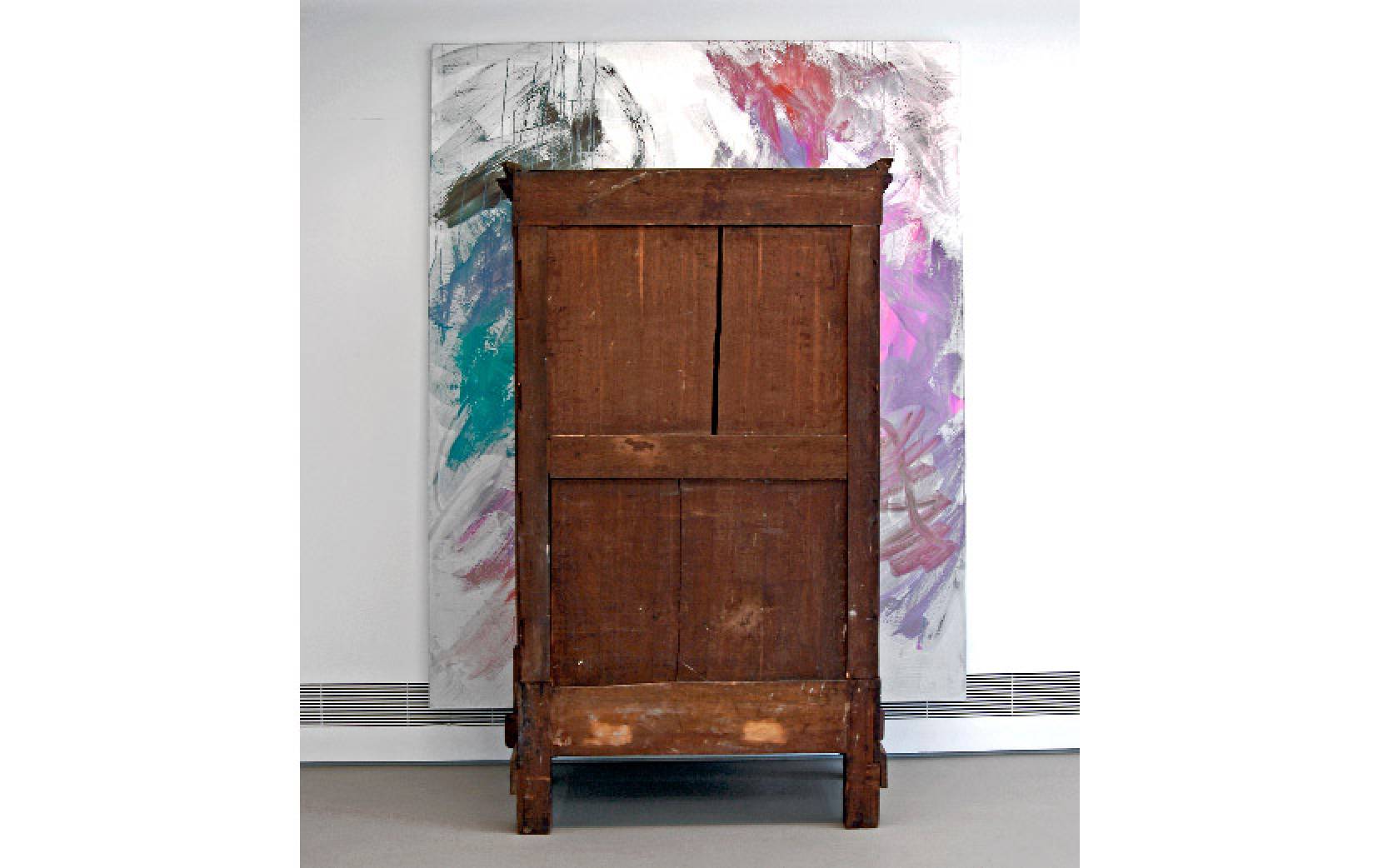 The George Economou Collection is pleased to present CHANCE, a selection of provocative performances by Marina Abramović, David Hammons and Robin Rhode.

Cross-culturally, chance resonates as risk, a speculation or a gamble and perhaps opportunity toward the desired outcome carried in the eye of the beholder. An ephemeral happening in life, chance is similar to performance, yet here it is staged and revealed through monochromatic photography video and variegated installation.

In this context, Abramović, Hammons and Rhode compel the viewer to question the perception of chance through one’s own experience in relationships, the Establishment and the dream. Each performance challenges the mystical nature of chance having used the body and a tool with no absolute ruling. The action sways in either direction beyond one’s control and within this limbo, the viewer is invited to decide for themselves.

Often describing herself as the “grandmother of performance art”, Abramović plays between the breaking points of the body and the mind. In her collaboration with longtime partner Ulay, she surrenders full control and enters a life-threatening, vulnerable position in their performance, Rest Energy (1980). Applying the weight of their bodies, Abramović leans backward grasping a bow, while Ulay opposite her also leans backward, clinging onto the taut arrow directed at her heart. As the timed four minutes pass, they remain steadfast countering their fatigue and rapidly increasing heart beat. Abramović admits, the performance explored love and “complete and total trust”.

Countering this private world, Hammons in the 1970s became preoccupied with the breakdown of cultural classifications placed in the “high” or the “low” and set the judgment of the art historical canon into question. His installation Untitled from 2008 launches this conceptual ideology by confronting the elitist identity of painting, notably abstract expressionism. Hammons imprints his physicality by actively thrusting a wooden armoire with its mirrored front against the colorful, gestural surface of the canvas. Here, the artist summons the viewer to imagine and reinterpret distinguished forms of twentieth century art, with no control in the final resolve.

Drawing from South African post- apartheid experiences and the memories of those generations before him, Rhode’s subject matter varies from poverty, politics, petty crime, gambling and racial stereotypes. In the photographic installation, 36 Ways a Dice can Roll/ Dice (2011), he captures the fundamental human will to succeed, often with great risk to achieve a certain desired reward. The thirty-six storyboard inspired panels depict Rhode as protagonist, disguised as a common “suit”, tossing an imaginary, colossal pair of dice drawn on an industrial urban wall. Through a sequence of staged sweeping actions, the viewer reflects on the tension between desire, gain and loss in the ever unpredictable game of life.

Life is shaped by choices tailored to the individual’s needs at a particular moment in time. However one consciously believes to be in complete control, how much of a role is owed to chance? Within the exhibition, each artist encourages the audience to freely ponder between the lines of our public and private lives, eager to provoke unexpected discoveries unto ourselves.