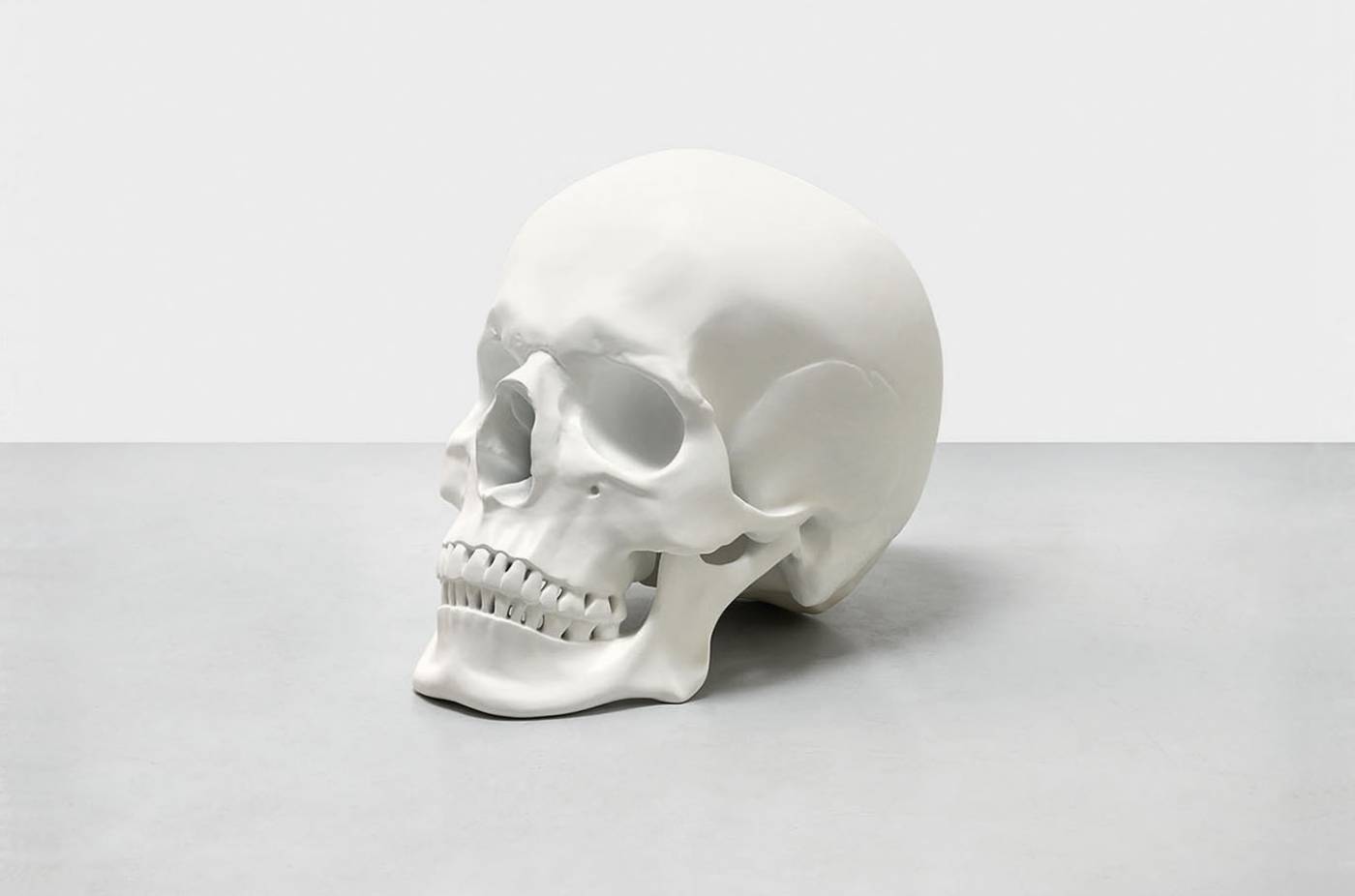 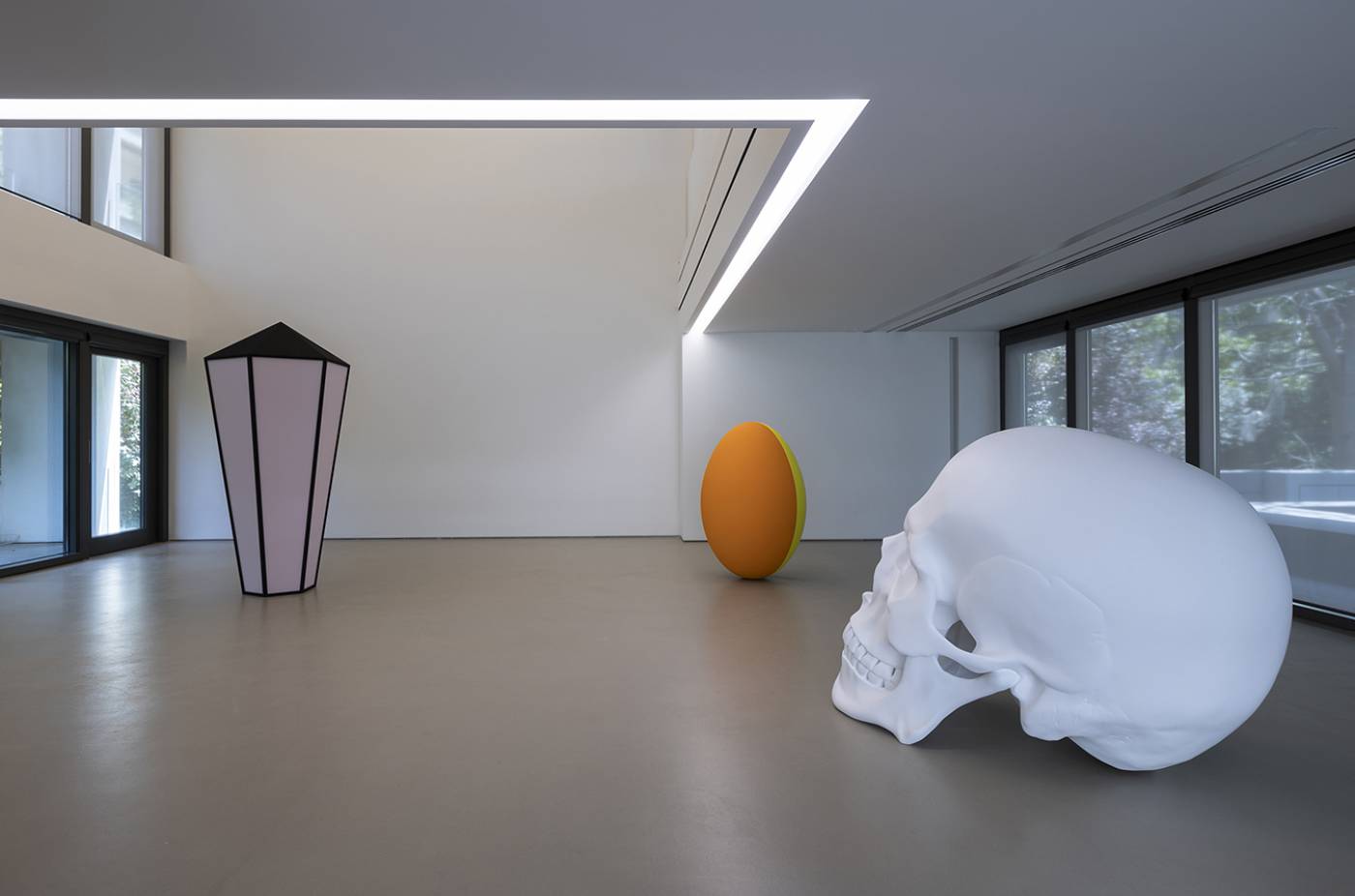 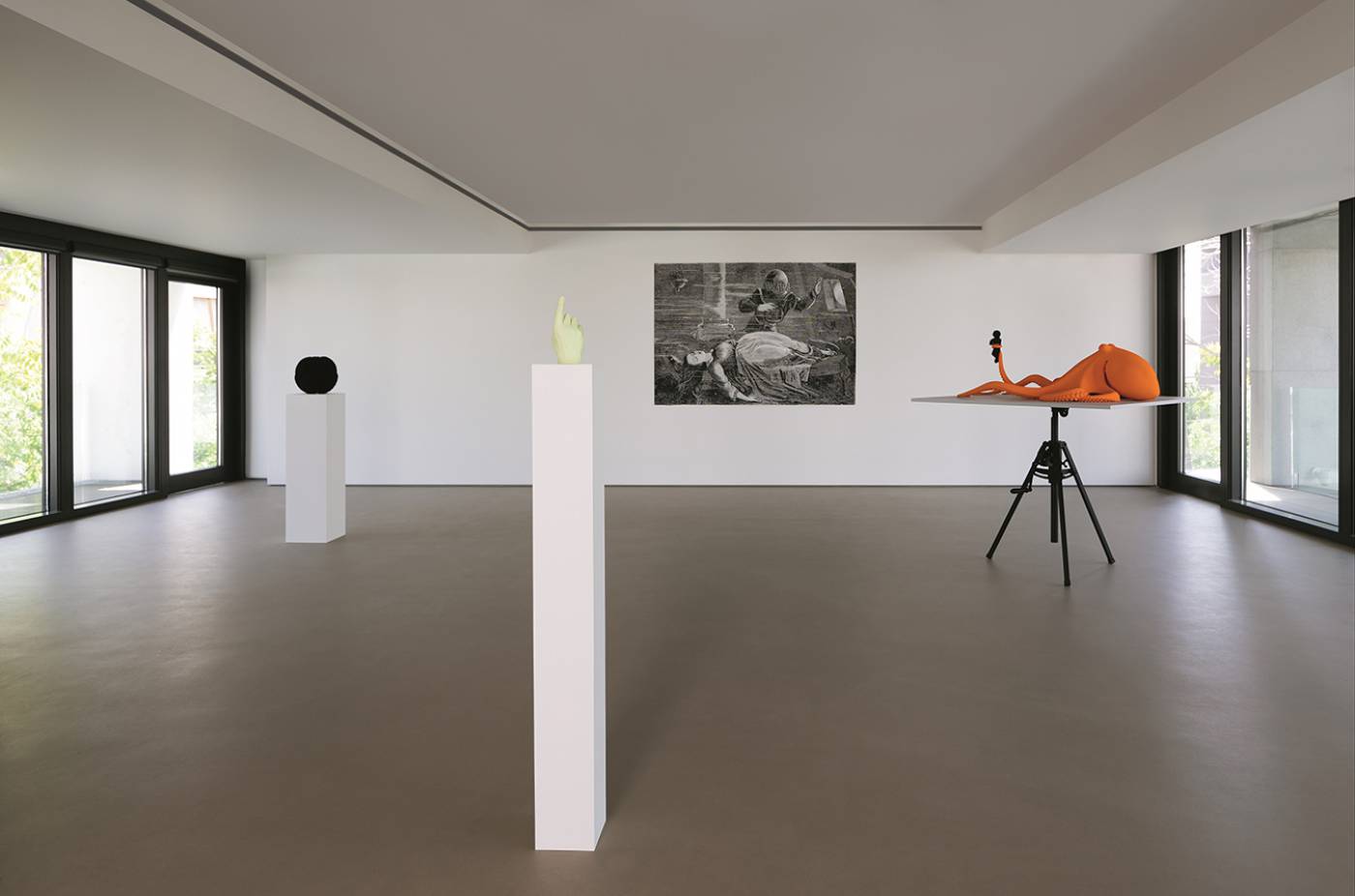 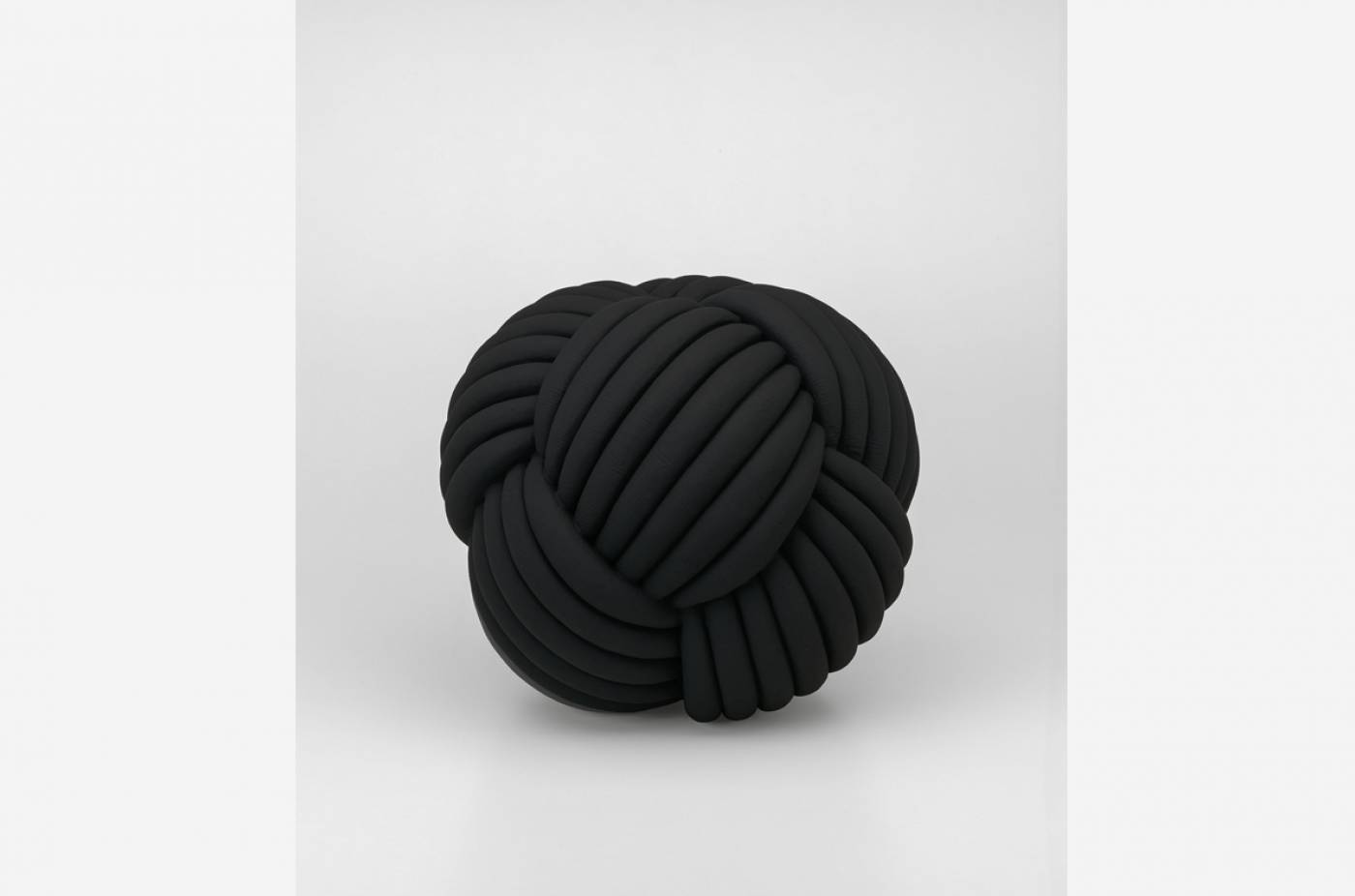 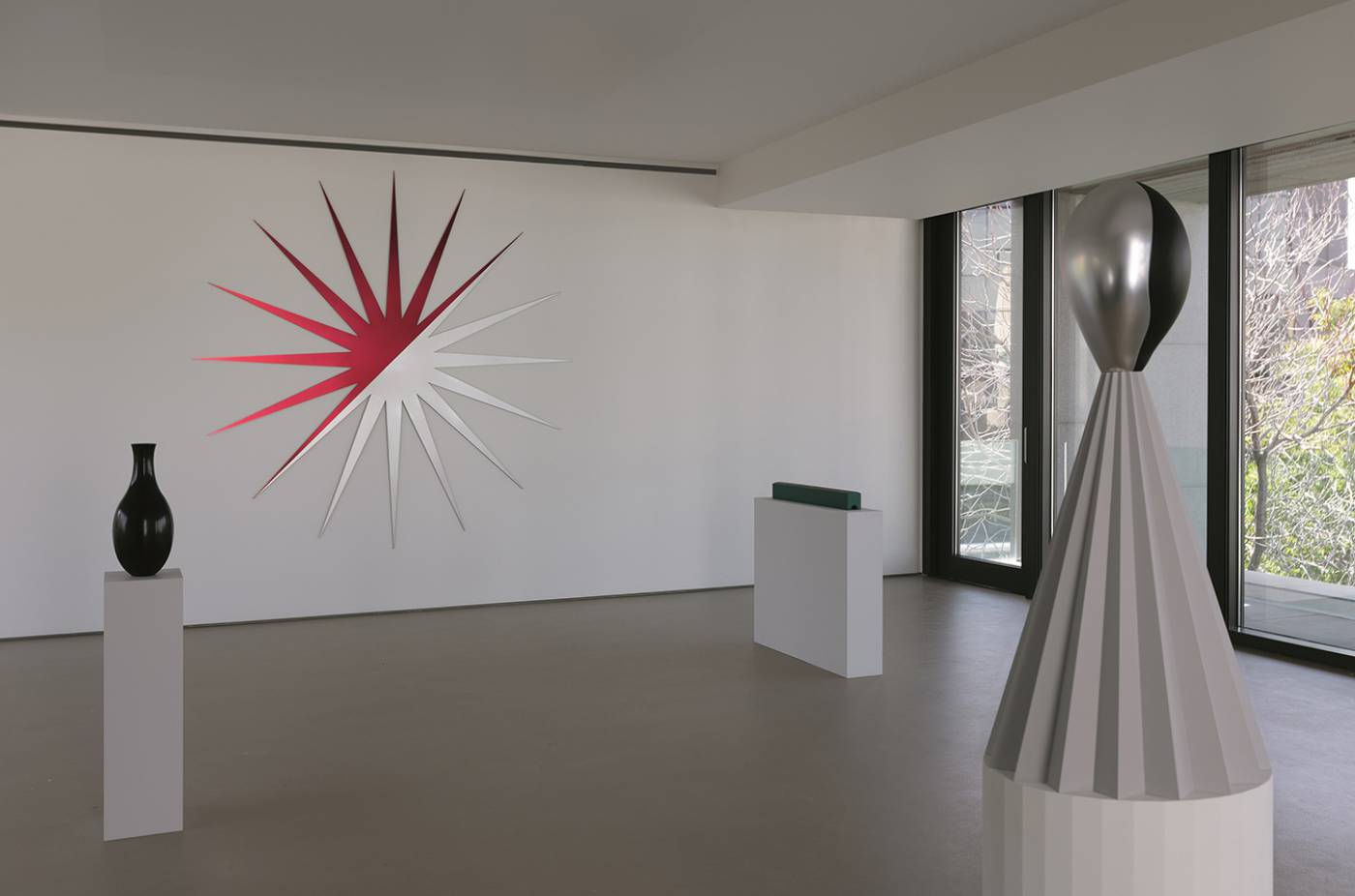 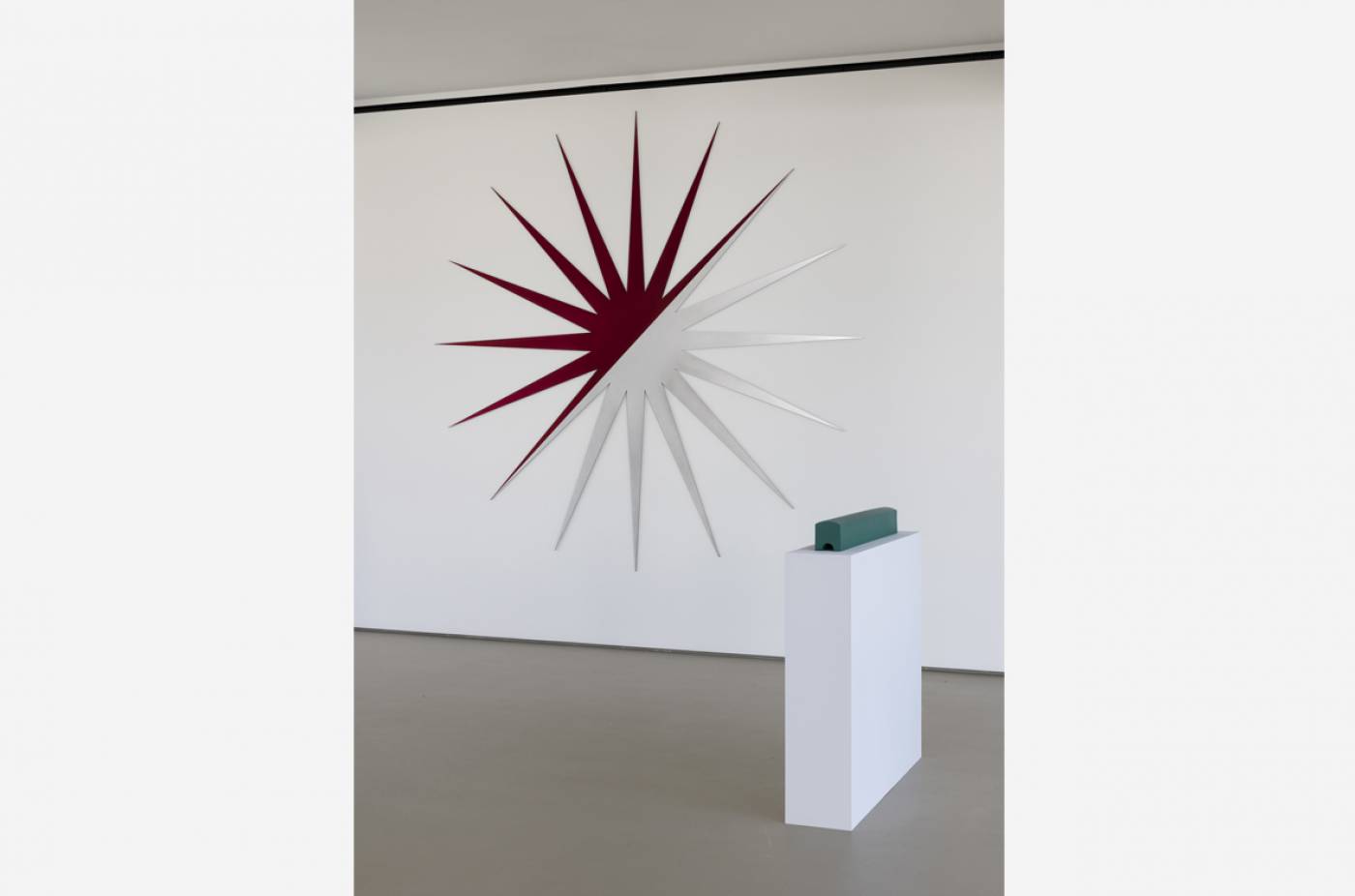 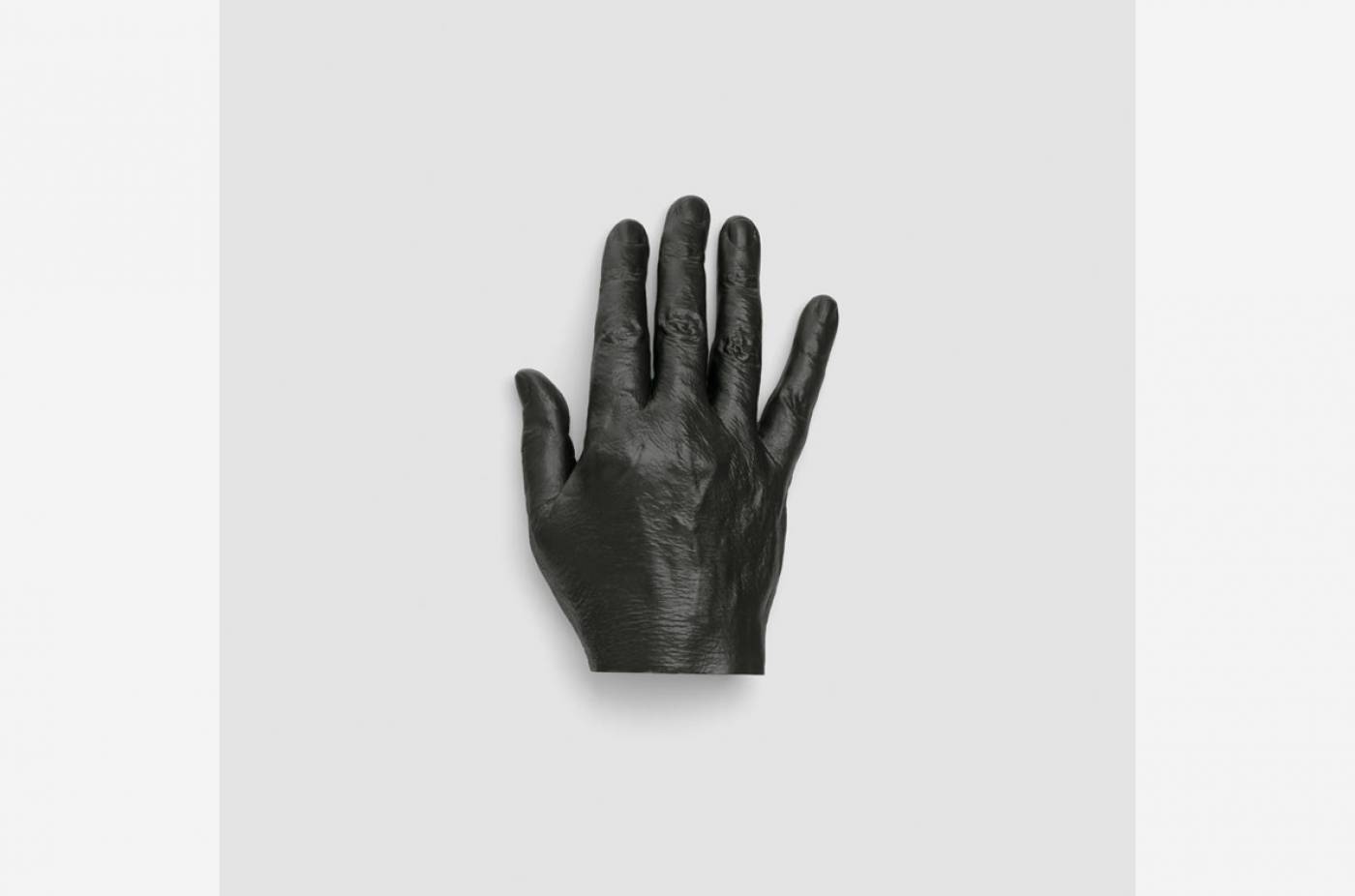 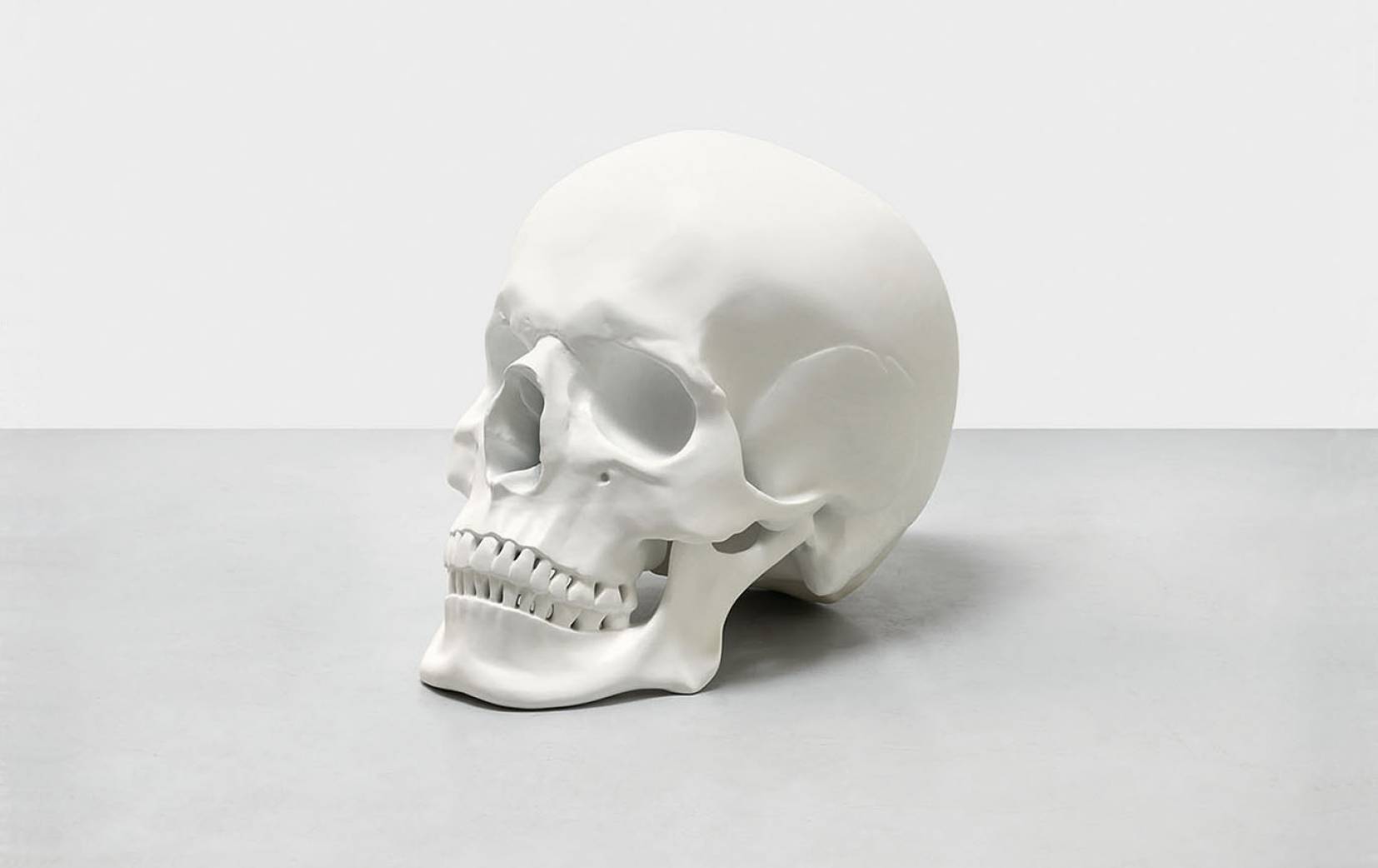 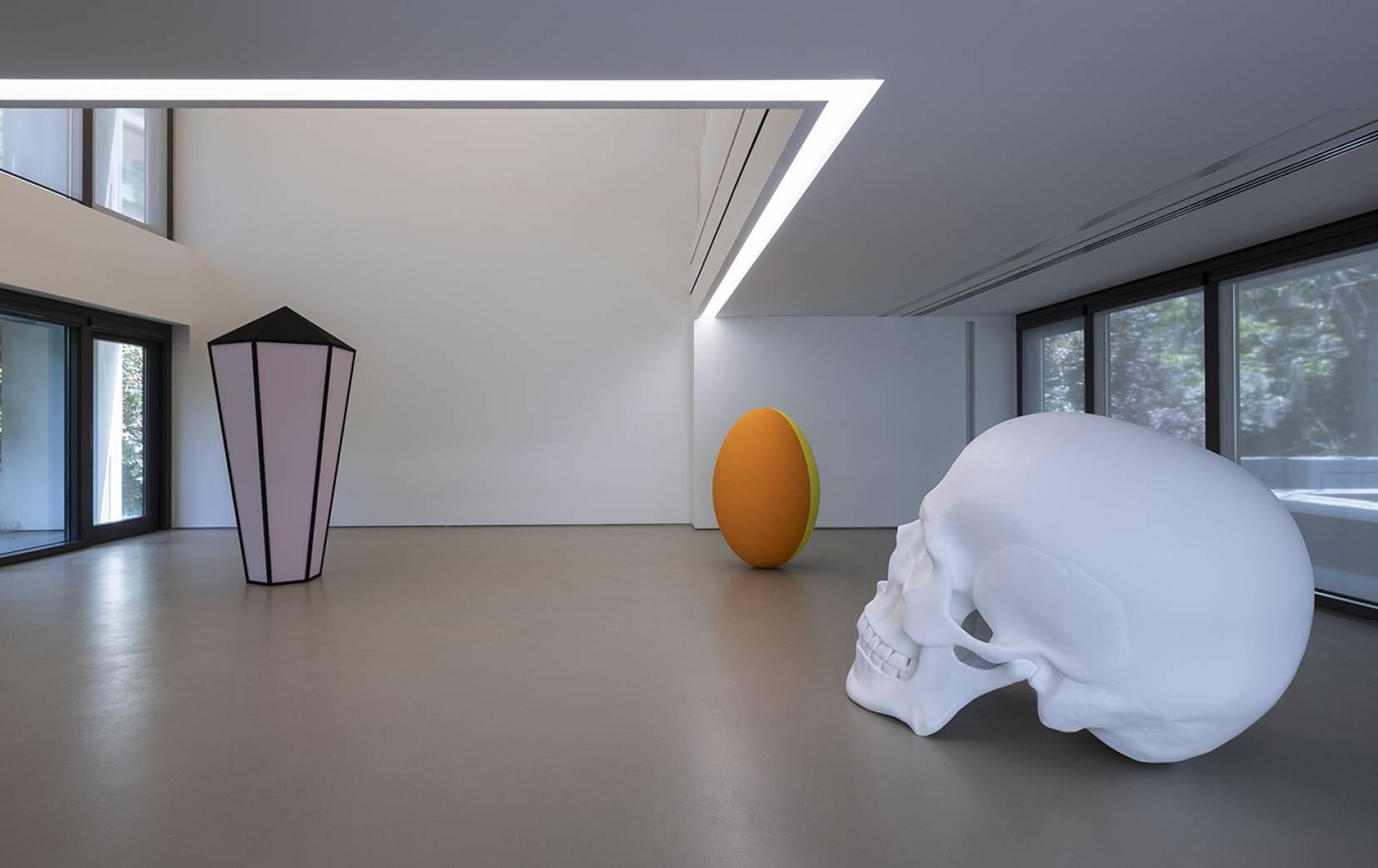 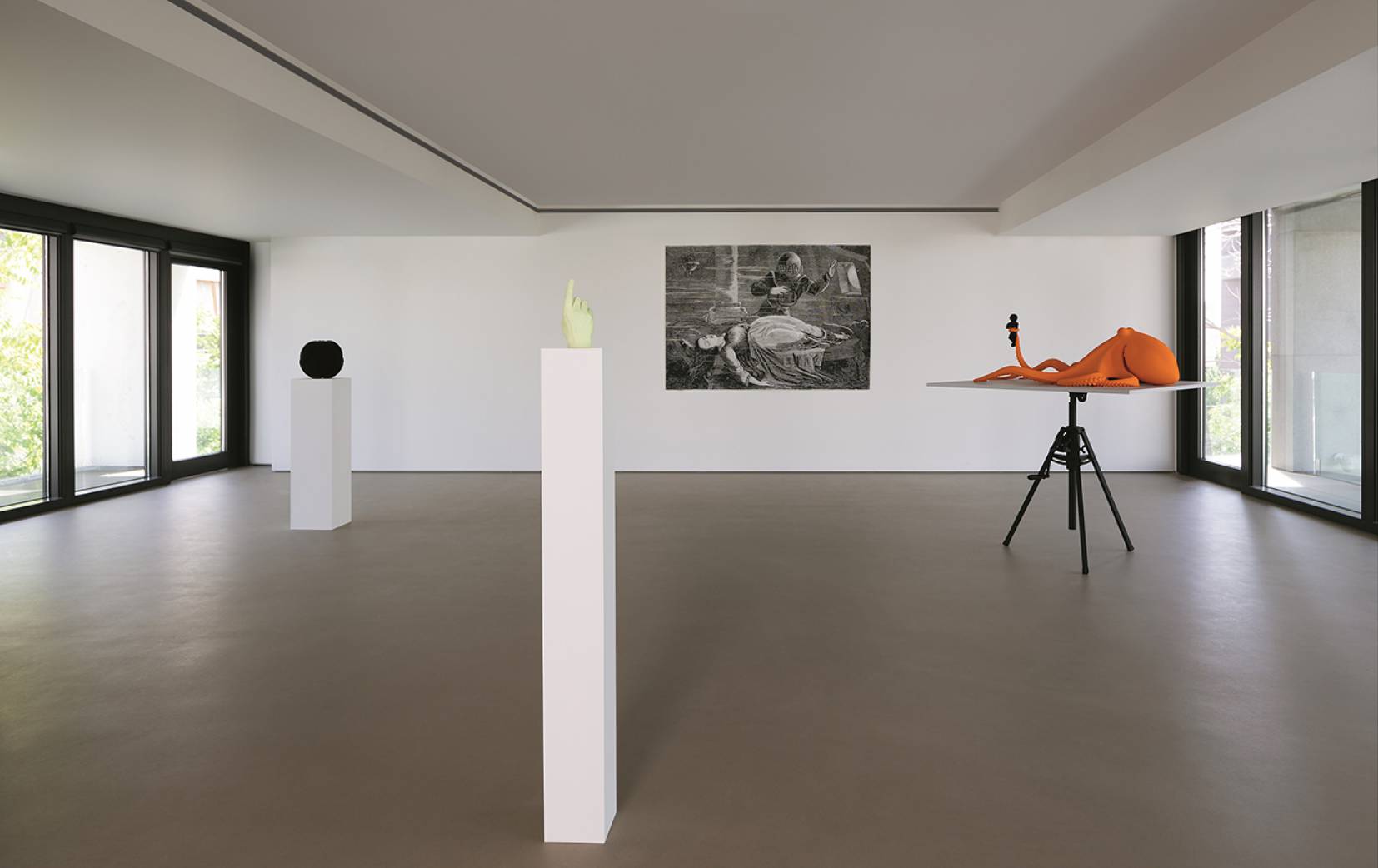 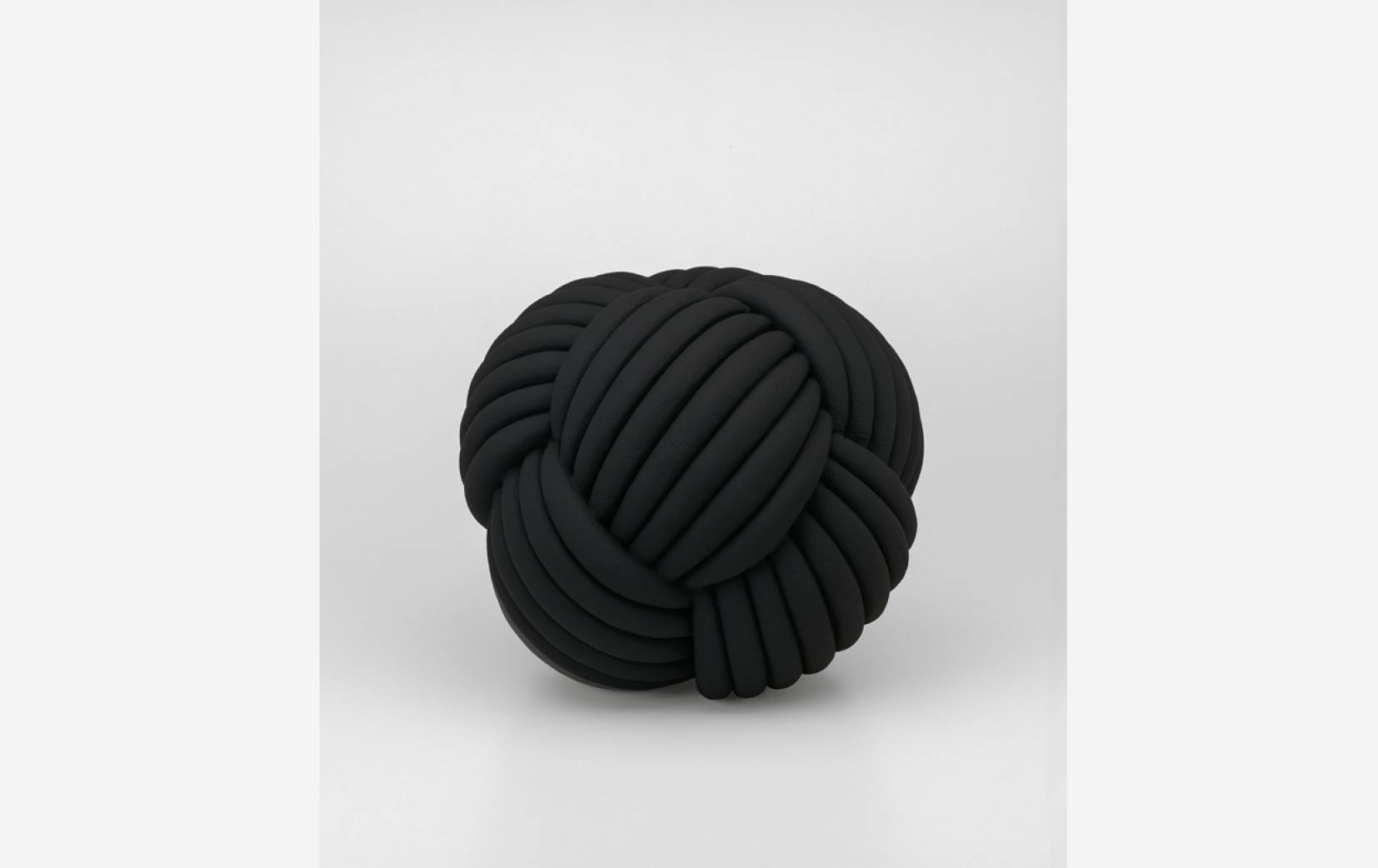 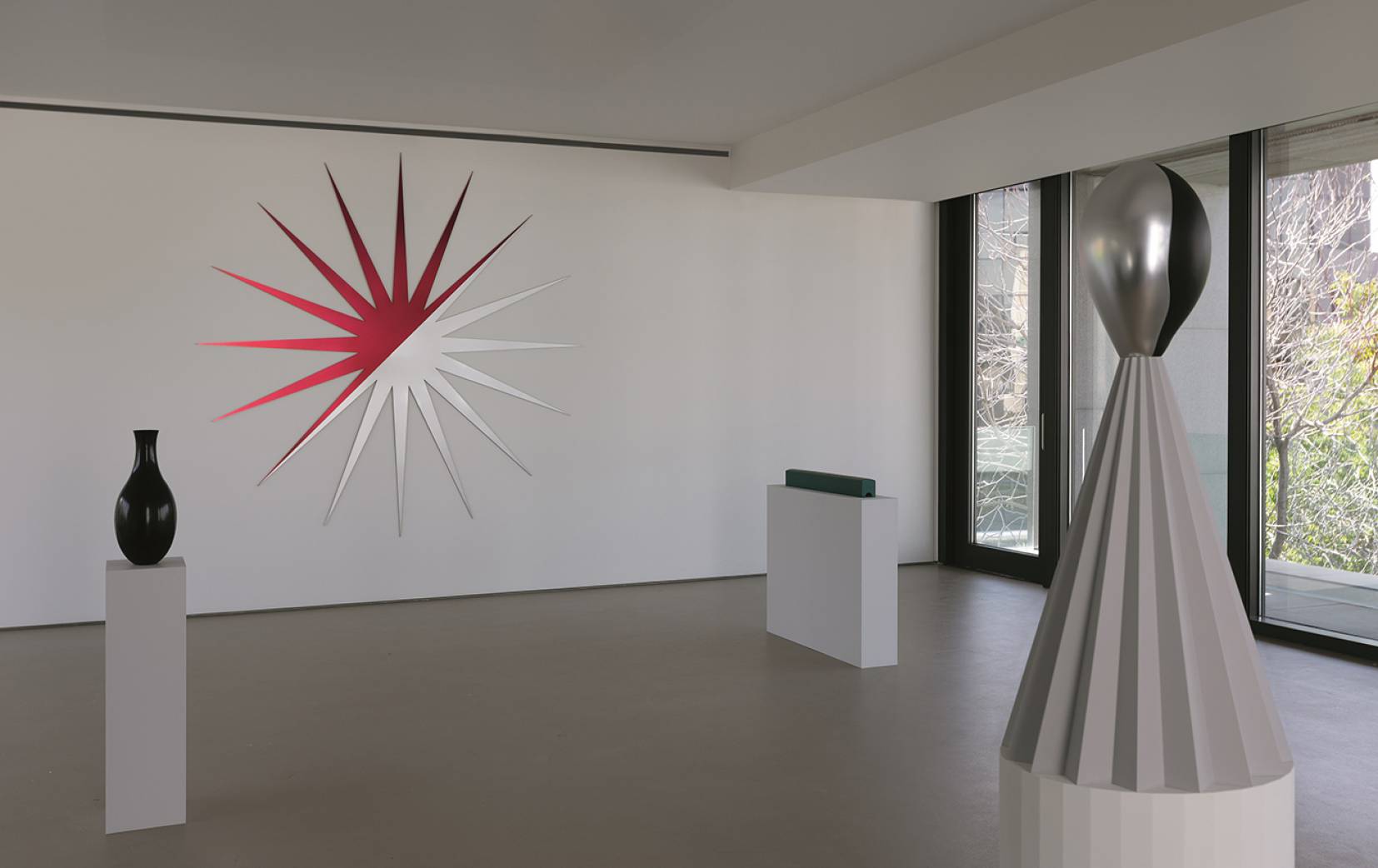 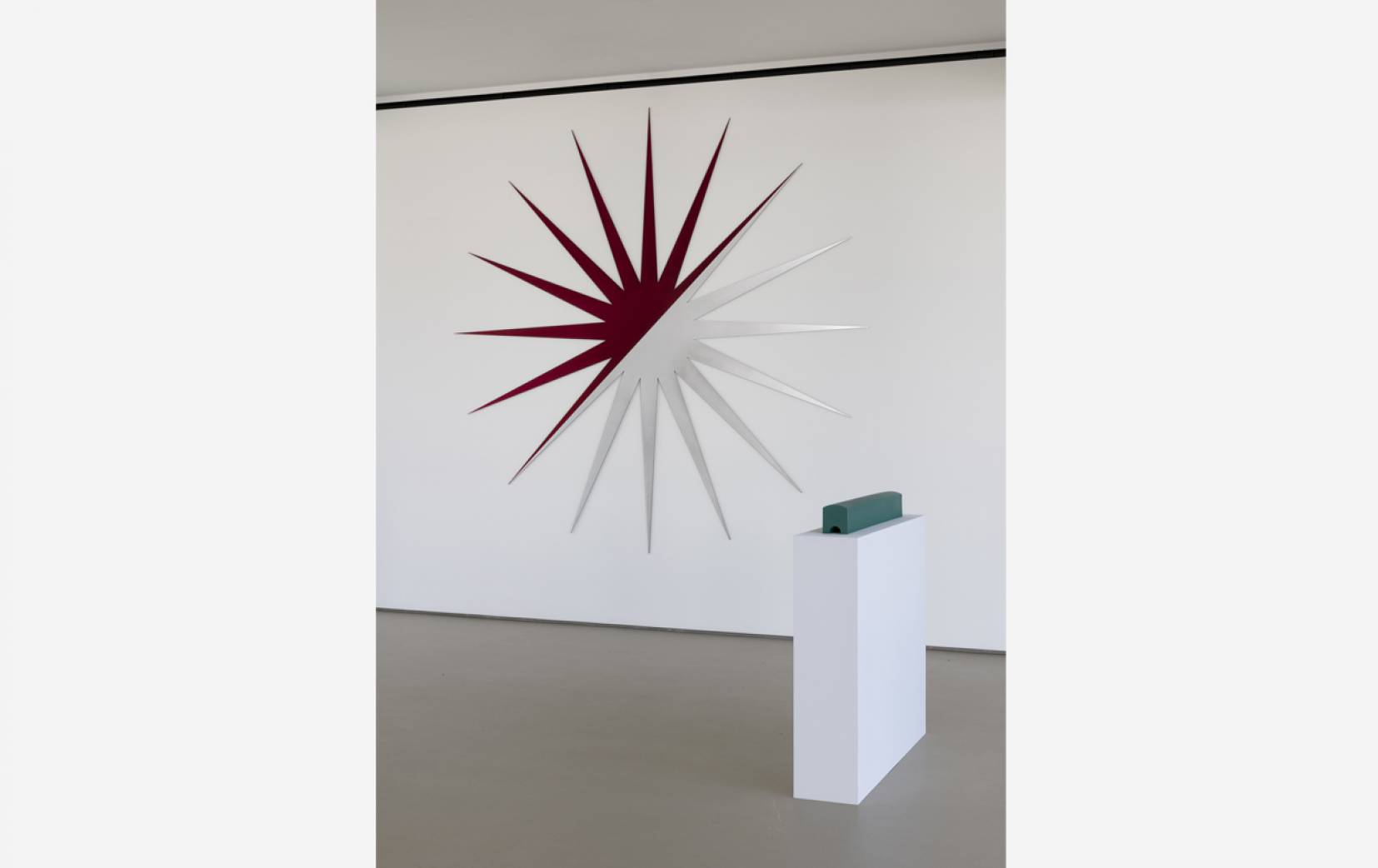 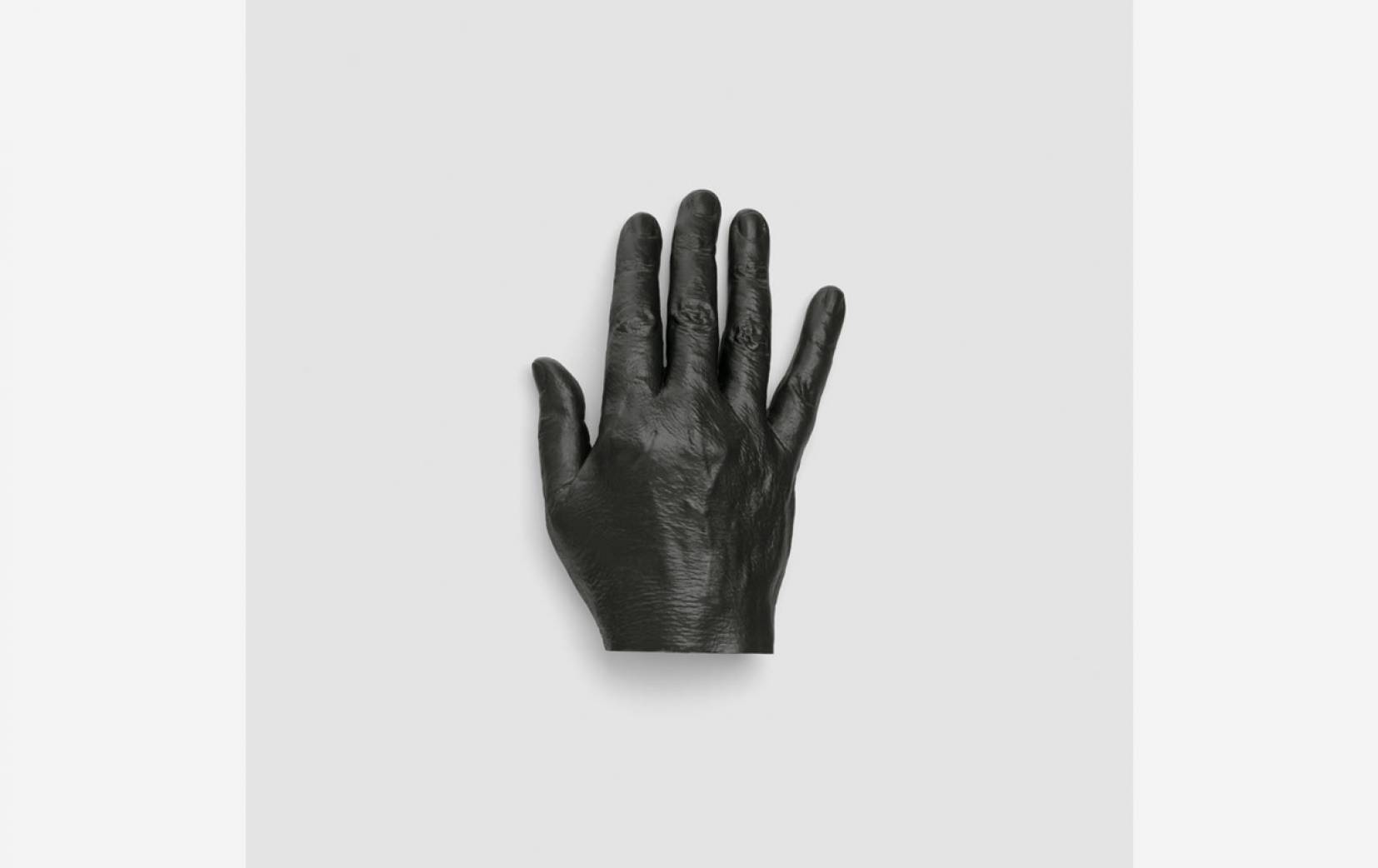 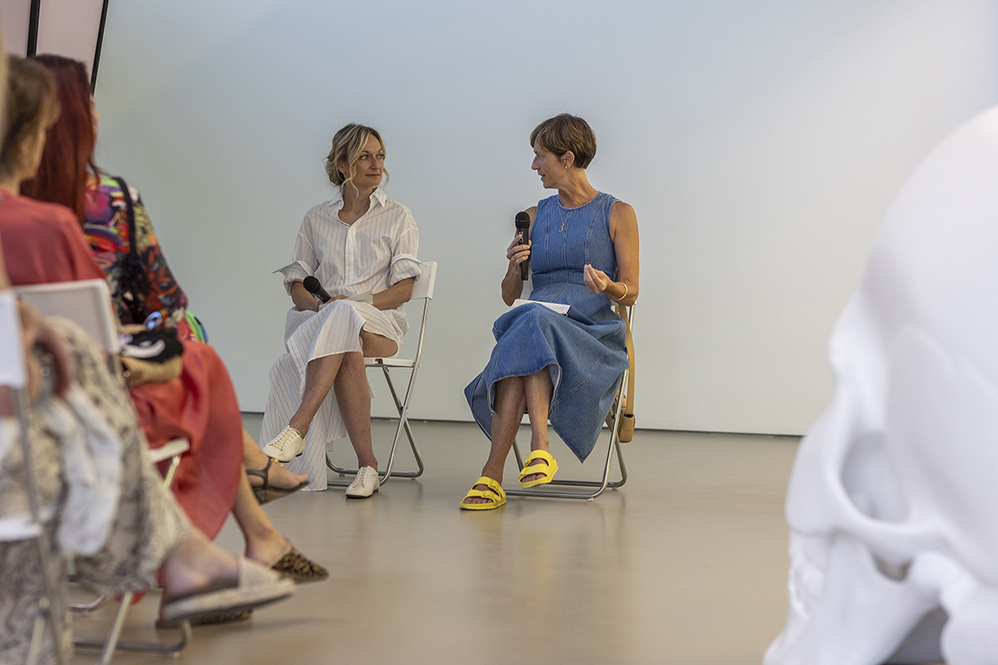 The German sculptor Katharina Fritsch has made a significant contribution to visual art since the early 1980s. With distinctive cast forms painted in vivid colors, she has developed a specific sculptural lexicon encompassing a typology of everyday objects, animals, and humans, as well as installations based in the mythological and surreal. A master in the deployment of scale, Fritsch is known for installing her work in ways that demand our attention, typically leaving the sense of a resonant interior image or uncanny gestalt that is hard to dismiss or forget.
Fritsch’s exhibition at the George Economou Collection is the artist’s first solo show in Greece, a country whose own rich history of figurative sculpture, mythology, and storytelling resonates with her work and adds a new layer to its reception. Fritsch has chosen to show recent pieces alongside some of her earliest productions made during and soon after her studies at the Düsseldorf Art Academy in the early 1980s. Across the three floors of the space in Athens, the artist has orchestrated a carefully calibrated visitor experience. The artist has said, “I never see an exhibition as simply a sequence of works but always as one large picture.” Each work included here has been selected for this total environment.
On the ground floor are three works—Ei / Egg, Laterne / Lantern, and Schädel / Skull—made to be exhibited together in 2017. Fritsch is known for grouping her works in relationships of concepts, colors, and forms that in effect establish their own environment of association. In this case, works that are deceptively simple in origin—a natural form, a somewhat historical-looking light fixture, and the familiar symbol of mortality—complicate one another, creating shifts in their more familiar meanings while bringing into play entirely new ones.
On the second floor Fritsch invites associations between the rich seafaring history of the Greek people and her own fascination with the stories, dreams, and creatures of the watery depths. Fritsch’s bright orange Oktopus / Octopus (2006/2009) lies like a specimen on a white tripod table, but despite being out of its habitat, the mythical-yet-real creature still clasps in a raised tentacle the body of a black-clad diver. The animal’s legendary intelligence and chameleon-like capacity to adapt to the color of its surroundings—a facility so refined it could, like Ei / Egg, form a perfect 50/50 split as it moves through the environment—suggests that Fritsch’s octopus, not human life, is the true victor of the sea. This impression is corroborated by the adjacent oversize enlargement of a nineteenth-century engraving depicting a diver finding the corpse of a female passenger in the wreck of a steamship. While one of the woman’s hands is draped gracefully on the floor, the surprised diver’s hands are raised in shock, creating a wave of gesture and action across the sexually charged image.
Fritsch has taken this exhibition as an opportunity to explore her ongoing interest in twilight—in the ambiguous, in the changeable and unstable moods, visions, and mental states that come with the moment of the day becoming night. Among her influences are the work of Giorgio de Chirico (born, not coincidentally perhaps, in Volos, Greece, in 1888). De Chirico’s dramatically isolated landscapes of forms are reflected in Fritsch’s display on the third floor, where each individual object takes on the attributes of a sign. Fritsch has said, “I think in pictures.” Her exhibition for the Economou Collection brings together images in which feelings, memories, stories, and experiences go beyond the subjective to produce an abundance of shared associations and interpretations.
The exhibition is curated by Jessica Morgan in close collaboration with the artist and Skarlet Smatana, Director of the George Economou Collection. A publication with essays by Morgan and Jacqueline Burckhardt will accompany the exhibition.